One reason that many of my customers are frustrated with asphalt shingles is the black streaks that grow on them. The streaks that you see on shingle roofs are actually a tough algae called Gloeocapsa magma. It tends to grow on the shady side, not the sunny side, because the sun kills it off (although the reason it is black: it grows a tough skin to protect itself from UV rays). 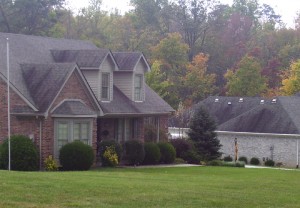 Algae forms black streaks on the shady side of roofs.

Have you noticed these streaks forming MUCH sooner and much more widespread today than even ten years ago? The reason for that is the shingle formula and how it has changed over the years. Shingles used to be very high in petroleum content (which kills the algae) but today with oil prices much higher, shingle makers have reduced the petroleum content and have replaced it with limestone filler. The limestone feeds the algae. The result is not only black streaks much sooner and greater, but also shingles that begin their life very dry and brittle with so much less petroleum in them.

Metal roofing with a smooth finish does not exhibit this algae streaking at all because 1) we don’t give it the limestone to feed on, and 2) painted metal roofing has a very smooth, non-porous surface that doesn’t give algae a foothold to grow.

If you want to end your roofing worries forever, add beauty and value to your home with a Classic Metal Roof! 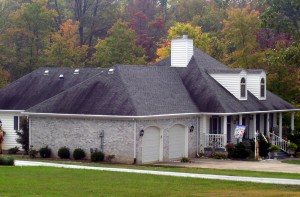 Black algae streaks can ruin the appearance of an otherwise attractive home.

Considering a metal roof? Have questions? We're here to help. Send us a message and we'll get back to you ASAP!

Learn More About Us